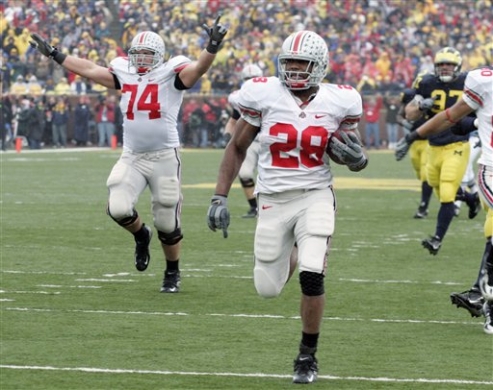 In football seasons past, a week like this would have been different. The buildups to the Texas games of 2005 and 2006 were both full of posts about the game.

Saturday’s game at No. 1 Southern Cal is that big. It might be bigger. It’s not unreasonable to say that the reputation of Ohio State’s football program — and, along with it, that of the entire Big Ten conference — is at stake.

Yes, I’ve been wearing Buckeye gear to work all week. Yes, by this time tomorrow night I’ll be beside myself, over a college football game that’ll be ready to begin in about 45 minutes.

But for some reason, this week has been different.

It could be the hangover from the last two national title games, one of which was an absolute beating and the other a game that Ohio State removed itself from with sloppy defense and far too many penalties.

It could be the team’s performance against Youngstown State and OU. The game against my Bobcats was especially poor; in fact, my Alma Mater should have beaten my Buckeyes last Saturday.

It could be the dreadful feeling — a pit-of-the-stomach ache — that we’re not really going to be ready to go unless Beanie Wells, our injured Heisman Trophy candidate, is ready to go as well.

And it could be that the Trojans looked awfully good in their only game of the 2008 season, a runaway win on the road against Virgina.

Whatever the reason is — I’m not feelin’ it this week.

The logical side of my brain has been trying to get my attention all week, shouting reasons why I shouldn’t be overly concerned:

Which side wins this time? We’ll find out tomorrow.