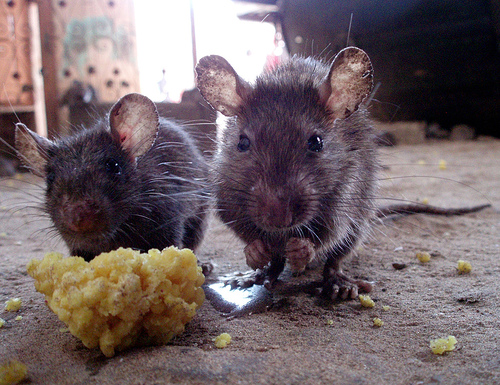 Monday started great. After not getting enough sleep, Mrs. Crappy abruptly charged into the bedroom, told me to wake up, put on my glasses and check on the birdbath we had been using as a bird feeder for a few weeks.

And I stumbled over to one of the back windows just in time to see a rat jump up into the feeder to help itself to breakfast.

“Is that what I think it is?” Mrs. Crappy asked. Suddenly awake, I responded that it was.

OK. I’m willing to make some concessions to urban living (or, as urban as Brighton Heights can be, I guess). Seeing a rat here or there shouldn’t be unexpected and isn’t the end the world. I’d rather not see them in my backyard, but this is a problem we can deal with.

Mrs. Crappy decided this is a problem she would deal with RIGHT NOW; she took the day off, bagged and hauled our little brush pile to one of the city dumps, disassembled and re-assembled the stone wall along the back side of the yard, bought poison and placed it along our back fence and in the overgrown backyard of our squirrely next-door neighbor, whose “shrubs” seem to be the home of the infestation (She did this after he left for work Monday afternoon, after spotting a few more in his yard while talking to him. He seemed to be aware that there might be rats living in his jungle; he didn’t seem to be overly concerned. So don’t tell.). And, to the chagrin of the 18,000 sparrows that visited the feeder each evening, we have suspended the birdseed buffet until further notice.

We’re not slobs. We don’t have garbage lying around. And I don’t expect this to become a serious problem; between the poison and the elimination of an easy food source — and especially if we can convince our neighbor to take a machete to his backyard jungle — I’m thinking the rats will simply move on.

This is a part of city life I could have done without experiencing. We had mice in our Butler apartment two different winters (Miles LOVED watching them but never seemed to consider doing anything besides watching them scurry across the kitchen floor); a couple traps and some steel wool in a hole behind the stove seemed to solve those problems.

I’m not sure why, but rats seem worse. So while we’re sorry that the birds are going to have to find a new place for dinner, we’re not going to be feeding any of the other neighborhood critters at the same time.