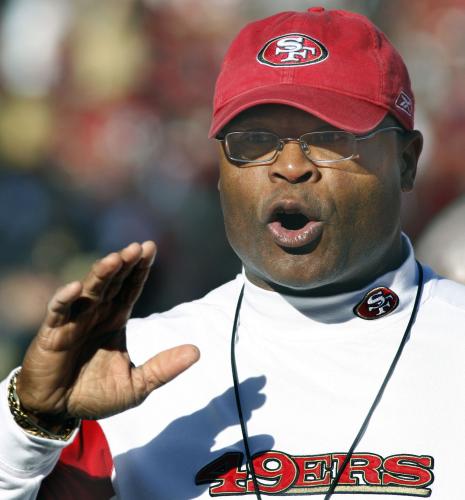 I just finished watching the Niners beat the Bears; even though it was an ugly game — one of the ugliest I’ve seen this season that didn’t involved the Browns — it brought back some interesting memories.

Upon the close of the 1995 NFL season, I was kind of stuck. Midway through the fall, the Owner Whose Name Shall Not Be Spoken announced he was stealing my football team and moving it to Baltimore. My first impulse was to take every single bit of my Browns gear — shirts, hats, books, everything — wrap it all up in my Cleveland Browns flag and go find someplace to burn the whole bundle.

Thankfully, Mrs. Crappy talked me out of that, but I was still left with a problem — I was a huge NFL fan, and I was without a team. I was still feeling a bitter about what happened, and I came up with a mildly sarcastic solution — I declared myself a free agent, and sent letters stating so to each team in the league.

The letter said the team that made the best offer would earn my undying loyalty, at least until football returned to Cleveland in one form or another. It said I would buy merchandise, and make every attempt to see my new team play in person when it appeared nearby. And I asked one question — why should it be you?

Each team got the same letter and the same opportunity to respond. About a half-dozen teams sent me something small, like, say, a magnet schedule for the season that had just ended. I was not impressed. The Bills, in an apparent reaction to the fact that I made it clear I had been a Browns fan, sent me a letter saying they would not comment on the Browns’ move, kind of an odd thing, because that’s not what I was asking them to do.

And every other team in the league failed to respond.

(Yes, that includes the Stillers. Think about that, boys and girls — if the team in the market where I was living had bothered to respond to my letter, I might be wearing black and gold today.)

I was kind of disappointed in the responses, until one Monday when I came home from work to find a box — a large one — that had been shipped to my apartment, from San Francisco.

I opened it up and found a letter, from a woman in the Niners’ marketing office who clearly understood the deadpan tone of my letter, and responded in kind. She outlined the Niners’ recent accomplishments, emphasized the team’s connection to Ohio (via the DeBartolo family) and said the Niners would be proud to have me as a fan.

It didn’t stop there. I pulled aside a sheet of brown shipping paper and saw I had hit the mother lode: three T-shirts, three hats, a program from the most recent Super Bowl, a media guide, a team yearbook, and all manner of pins, buttons, magnets and other Niners trinkets.

I did return to Cleveland Browns fanhood in 1999, although I’m not certain the team ever actually joined me. With the current season going as it is, I may be faced with a decision similar to the one I had to make in 1995. No, I won’t consider burning my Browns gear this time around, but packing it all up in a box and putting it up in a dark corner of the attic would be an option.

And if I’m not going with the Browns, what’ll I do? I’ll tell you right now — free agency could be an option.