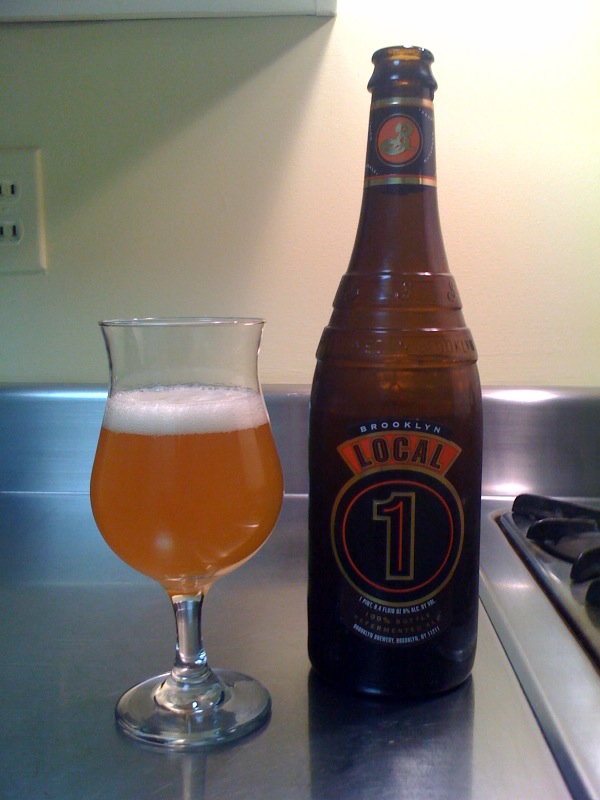 OK, let’s be honest here. I’m using the pretense of “studying for Craft Beer School” as an excuse to crack open some bottles that I’ve been saving for a special occasion. Yeah, sorry about that.

We came home from dinner at Church Brew Works tonight and I still had beer on the brain. And then I remembered that I had tucked my bottle of Brooklyn Local 1 in the beer fridge a few days before. A perfect opportunity for a little work.

Brooklyn Brewery says this is a strong Belgian-style pale ale, along the lines of a Duvel or a Delirium Tremens. But Brooklyn takes a different approach with this, using German malts and hops and finishing with a Belgian yeast strain.

What else does the brewery say?

Behind the full golden color, you’ll find an alluring aroma, a dynamic complex of flavors, Belgian flair, Brooklyn fortitude, and a dusting of our special yeast. To create this beer, we use the old technique of 100 percent bottle refermentation, a practice now rare even in Europe. It gives the beer a palate of unusual depth.

I also found via the Beer Advocate site that Brooklyn’s founder Garrett Oliver classifies this one as a strong saison. Hm. Let’s see.

It’s a fizzy pour, like some tripels I’ve come across, and it retains a half-inch bright white head over an almost-orange body. The nose doesn’t reveal anything out of character — I got vague hints of fruit and the familiar Belgian musty thing. Promising.

The taste, though, was unexpected. Yes, there’s the biscuity, musty Belgian flavor, alongside hints of citrus, but this isn’t sweet at all; in fact, it’s a little tart, something I felt at the back of the tongue when I took the first sips. It’s a beautiful combination, and I think that’s what Oliver is talking about when he compares this to a saison — Local 1 has a lot more in common with Saison Dupont or Ommegang’s Hennepin than it does with Duvel. A stickler might be bothered by this; I am not a stickler.

Everything else worked well. The fizzy pour is a result of a fine, silky carbonation, luscious to sip. And although the “strong” part of “strong Belgian pale ale” is a not-screwing-around 9 percent, there are no hints of alcohol when you’ve got a mouthful.

I really enjoyed Brooklyn Local 1. And I now realize I should have bought that bottle of Local 2 — a Belgian dark — the last time I had a chance.