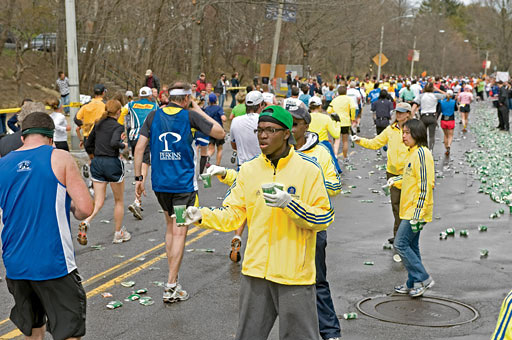 You may recall that on the last day of November — quite possibly while I was delirious upon completing yet another National Blog Posting Month — I made you guys a promise: That I would complete the half-marathon portion of the Pittsburgh Marathon.

You know, the one that’s being run on Sunday morning.

OK. As it turns out, training for a half-marathon is hard. Especially for a fat 43-year old.

Yeah, that’s all a bunch of crap. I didn’t do what I needed to do, and I ain’t running on Sunday morning. I am running, though — well, shuffling is a little more accurate — and I’m still going to keep that promise. I will run the half-marathon next spring, and I’ll get in at least a couple 5Ks or something longer in the interim. I owe it to you guys, and I owe it to me as well.

Here’s the interesting part. I’ve never been a huge fan of running, but once I got going this spring, I found that I wasn’t having a bad time. When I get up and run first thing in the morning, I find that I feel great for the rest of the day — my legs might be a little stiff and my knees might be a little sore, but to my surprise, I’m feeling good about this. Good enough that I’m going to keep going for a while.

I’m not running on Sunday, but I’ll be out there bright and early, helping to staff the water station at Mile-7.8, right in front of our glorious new casino. I’m looking forward to working with a bunch of fellow YinzTeamers at the station, but I’m also looking forward to cheering for a bunch of other YinzTeamers who are running — some as part of a relay, some running the half, and a few attempting the whole freaking thing. I’m proud to be helping out with one the city’s biggest annual events, but I’m more proud of my friends who are actually participating — and I look forward to joining them a year from now.

If you’re running tomorrow — and especially if I haven’t met you yet — let me know in the comments. I know we’re going to be busy at the water station — and I know you’ll be busy with the actual running — but I’d love to be able to look for you and yell a little extra loud as you hit 7.8. Good luck to all of you on Sunday!

The pic was stolen from a great little photo essay I saw in Runner’s World in advance of the Boston Marathon.