How you can tell it’s a NaBloPoMo month — we’re only two weeks in, and this is the second Facebook meme I’ve stolen from the blog.

I may have bitten off more than I can chew with this one, the *insertnumberhere* Things You Didn’t Know About Me meme. The rules and conventions for this one state that you like a friend’s post and they assign you a number; I liked Mel’s post last week … and she assigned me 15.

FIFTEEN. As in, the most she assigned to anyone who liked her post. I’m choosing to be flattered that Mel thought I could come up with that many reasonably interesting things about myself — even if myself thinks that’s probably a stretch.

Before I begin, let me make it clear that I’ll follow the rules here — comment on this post here, like or comment on FB and I’ll give you a number. And if you don’t have a regular outlet for Internet Fun, feel free to leave your list in the comments here.

Mushrooms and olives. I really want to like them. But I really, really don’t.

My first craft beer. I was visiting Juan in Brooklyn, and we stopped at his corner grocery in Park Slope to get some, uh, supplies before we went out for the evening. There, in the cooler, were six packs of Brooklyn Lager. I later found Brooklyn Brown in The Union, my home bar in Athens. And my life hasn’t been the same since.

Certified weather freak boy. I’ve always been curious about what makes weather work, ever since our childhood babysitter let me stay up and watch a thunderstorm light up Leighton Road. That fascination has continued well into adulthood, when I’ve voluntarily attended National Weather Service storm spotter certification classes multiple times — the basic class twice and the advanced class once. Understanding the weather helps professionally, but c’mon — as nerdy stuff goes, it’s pretty cool, too.

Shorts, man. I love this time of year. When the weather turns, I love digging out sweaters and coats and scarves and all the other accouterments. But let’s be clear — if it’s above 30 degrees, I’m wearing shorts.

I’ll die with a beard. The last time I shaved off my beard entirely was late in my collegiate career. I had an interview for an internship with an editor from a major metro paper in Ohio, and I wanted to make a good impression. But I’ve always suspected that I blew the interview because the editor had a glass eye that pointed up and to the left by about 45 degrees. I was so distracted that I don’t think I uttered a complete sentence the entire time we talked (and it’s always been my guess that the paper sent this guy to interview college kids FOR THAT VERY REASON). I didn’t get the internship and Mrs. Crappy liked the beard, so I grew it  back immediately. And seeing old pictures of beardless me are more than enough to help solidify the decision to keep it forever.

My cause: skin cancer. I’m not a preacher. I generally think it’s best to let people make their own decisions. But for the most part, preventing skin cancer is so simple — and it seems that so few people ever worry about it. I’ve written a bunch about this over the years, starting the time the second tumor was hacked out of my left arm. I’ve had three taken from my arm and one burned off of my forehead. And if I had just put on sunscreen when I was a kid, chances are decent that I wouldn’t have had the trouble I’ve had. It’s not a huge deal — none of my tumors have been serious — but given that skin cancer is largely preventable, it’s a thing for me. And yeah, I’ll probably try to make it a thing for you too. Sorry in advance. 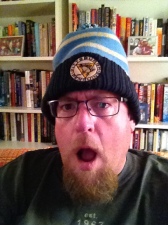 Best concerts by non-hippie bands. Wilco, especially the show at the Carnegie Music Hall in Oakland a few years ago. Little Feat, on a sweaty August night at the Newport. The Stones, on the Steel Wheels tour in Louisville, especially because that’s the first time I heard them play Sympathy for the Devil (otherwise known as the Greatest Rock ‘n Roll Song of All Time) live. Cowboy Junkies at Metropol, which had temporarily lost its liquor license, making for a quiet, respectful audience. Jorma Kaukonen and Michael Falzarano, in front of me and maybe eight other people at Another Fool’s Cafe in Athens.

Bourbon. The Manhattan is the family cocktail. I come by it honestly.

Irish kid, Italian cook. I have no Italian in me whatsoever, but I love me some Italian cooking — and, uh, eating. Some of this comes from the family spaghetti-and-meatballs recipe, which was born decades ago when the family owned a restaurant somewhere in Columbus; I suppose it also comes from it not being too difficult to do Italian pretty well. Lasagna? Yep. Carbonara? Yep. Improvising and tinkering with pasta dishes? Yep.

Meeting famous people. It might have something to do with my job — I’ve interviewed senators, congresspeople, Timothy Leary, Graham Chapman, and many others — but I have no difficulty marching up to someone I recognize and saying hello (and it still kills me that I wasn’t with Mrs. Crappy the time she walked right by Ringo Starr in Aspen a few years ago). As a caution — that goes for Internet-famous people as well. If we haven’t met before but I think I’ve spotted you while we’re out, I will stop you and introduce myself.

Best job ever. I have been a paperboy. I have worked in restaurants. I have made it through multiple holiday seasons at a chain of Hallmark stores in Columbus. And I am now a journalist, the fulfillment of the closest thing I’ve had to a lifelong dream. But without question, the most fun I’ve ever had was working at the Bagel Buggy in Athens every Friday morning for one of my senior-year spring quarters.

Work is surreal. I am a trained professional journalist. And nearly everything I do professionally now didn’t exist when I was a student at the E.W. Scripps School of Journalism.

The moment I first set eyes on Mrs. Crappy. I was never really sure love at first sight was possible until it happened to me. I was starting a late night at my college paper, and I walked through the business offices just as the general assignment staff — where most of us got our starts — was wrapping up a meeting. I looked over and there was a new girl — long, light brown hair. Round, almost Lennon glasses. Big smile and a big laugh. I was thunderstruck; I think I actually stopped and stared for a second before moving on to the production room. I tracked down the GA editor as soon as I could and was filled in, because she also happened to be Mrs. Crappy’s resident assistant. It took a while for us to connect — although not for a lack of effort on my part — but, yeah, it’s worked out pretty well.

Hats. In the summer? I’m a ballcap guy. But when the weather turns cold — as you may have gathered from the photos — I’m a fan of hats with stuff on them.