Yes. I’m aware that Thanksgiving isn’t for another week.

Here’s the thing. This year has been so miserable that I think we should all be looking for the things that make us happy. Because there hasn’t been a whole lot of happy for a while.

So if that means I completely blow up my traditional starting times for Christmas beers, I don’t care.

So if I call up the soundtrack to “A Charlie Brown Christmas” on Spotify in mid-November because I’m driving through a snow squall? Insert shrug emoji here.

And if I decide to put up the Christmas lights on the house eight days before Thanksgiving while listening to Tony Bennett sing Christmas songs in my earbuds? It makes me happy.

And we could all use more of that. Regardless of what the calendar says.

You don’t have to look far these days to find plenty of examples of Karens and Kens throwing their weight around in public. I’ve even seen them out in the wild, usually after someone confronts them about the lack of a mask in a store where it’s required. There is generally some shouting, maybe some throwing of things and then a dramatic-but-hasty departure. Witnesses shake their heads and wonder how it came to this.

I’ve found myself thinking about how to handle a confrontation over our new normal, especially since a maskless jerk who seemed to think he was funny crowded my mom in the grocery store.

And now I know.

Just a little while ago, I was checking out at the little Giant Eagle store in our neighborhood. The woman running the register is one of my favorite people there, always chatty and friendly while customers unload their carts. I held out my phone so she could scan my loyalty card barcode and then stepped back to the end of the belt to pay with my card.

And there’s a guy standing there. Already unloading his stuff. Standing right in front of the card reader. I said, “Sir, could you please back up? I’ll pay real quick and be out of your way.”

He stepped to the back of the belt, but went no further.

“Sir, could you please back up to the sign on the floor so I can pay?”

He says he doesn’t need to back up any further.

I now notice he’s not wearing his mask; he’s just holding it up over his mouth. And, because my brain works like it does, I also notice that he looks an awful lot like the late pro wrestling manager Bobby Heenan, but with a cut-off t-shirt instead of the satin jacket.

I am no longer being polite. Or quiet. “Back up. And put on your mask.”

The woman checking me out is now no longer behind the register; she’s standing next to the guy, asking him to move back. At this point she’s the reasonable one, saying if he could just back up for a minute, she’d get him checked out right away.

He says, to her and to me, that he doesn’t have to back up. There is now a lot of shouting. He pretends to swing at me once, after I asked him what was so fucking hard about this whole thing. He is red in the face (I probably was too) and telling me he’s going to break my jaw.

I made one mistake. I tossed his gallon jug of iced tea back in his cart. It came open, and poured out on the floor. He sensed that this was an opening, because he immediately started to shout about me assaulting him. “He ripped off my mask! He shoved me! Did you see it? Someone call the cops!”

A couple employees show up with mops, and they move his cart back — way back — and begin to clean up the iced tea. Another employee said the police were on their way. He stepped up to me one last time. “You’re going to jail, asshole. I guarantee it.”

I laughed. “You know the cops are going to ask other people what happened, right? Lying to a cop is a really bad idea.”

We’re now separated. I paid and moved my cart over to the service desk. The woman who checked me out — she is also the front of house manager — says to me, quietly, “Don’t worry, sweetie — I’ll tell the police exactly what happened.” And I apologized to her, repeatedly, for the scene and for spilling the dude’s iced tea on the floor.

He practically sprinted out of the store, still making cartoonish gestures at me, when the police arrived. I thanked the manager one more time for her support and understanding and stepped outside, away from Mr. Heenan. I told one officer what happened while the other officer spoke to the guy. When the second officer came over to me, I learned that the story had apparently changed back to something close to reality — no mentions of assault or vicious mask removal. The second cop made sure I wasn’t parked near my friend. Then smiled, shook his head and said to have a nice night.

But I haven’t had a nice night. It’s nearly two hours later, and the adrenaline is still pumping. I still feel guilty about causing a problem for the people who work in the store — they shouldn’t have to be the ones to deal with shit like this. I’ve gone over — and over and over — the confrontation in my head, and I don’t think I’d do anything differently — except for the iced tea thing — if this happens again.

Or, maybe, when it happens again.

That’s the thing I don’t get. Why did this happen? Did the guy come in the store thinking he was going to pick a fight with someone? Was he just having a bad day? And even if the latter is the case, what is so hard about being respectful? Or even just tolerant? I mean, I was literally 60 seconds away from walking my cart out to the car. I wouldn’t think twice about taking a step back to let someone finish up their purchase. I go back to the question in the first paragraph: How did we get here?

And more importantly: Can we please go back?

So. What if I tried to post every day in October?

While I decide, here’s a picture of our cats.

No, I don’t know what they’re doing either. 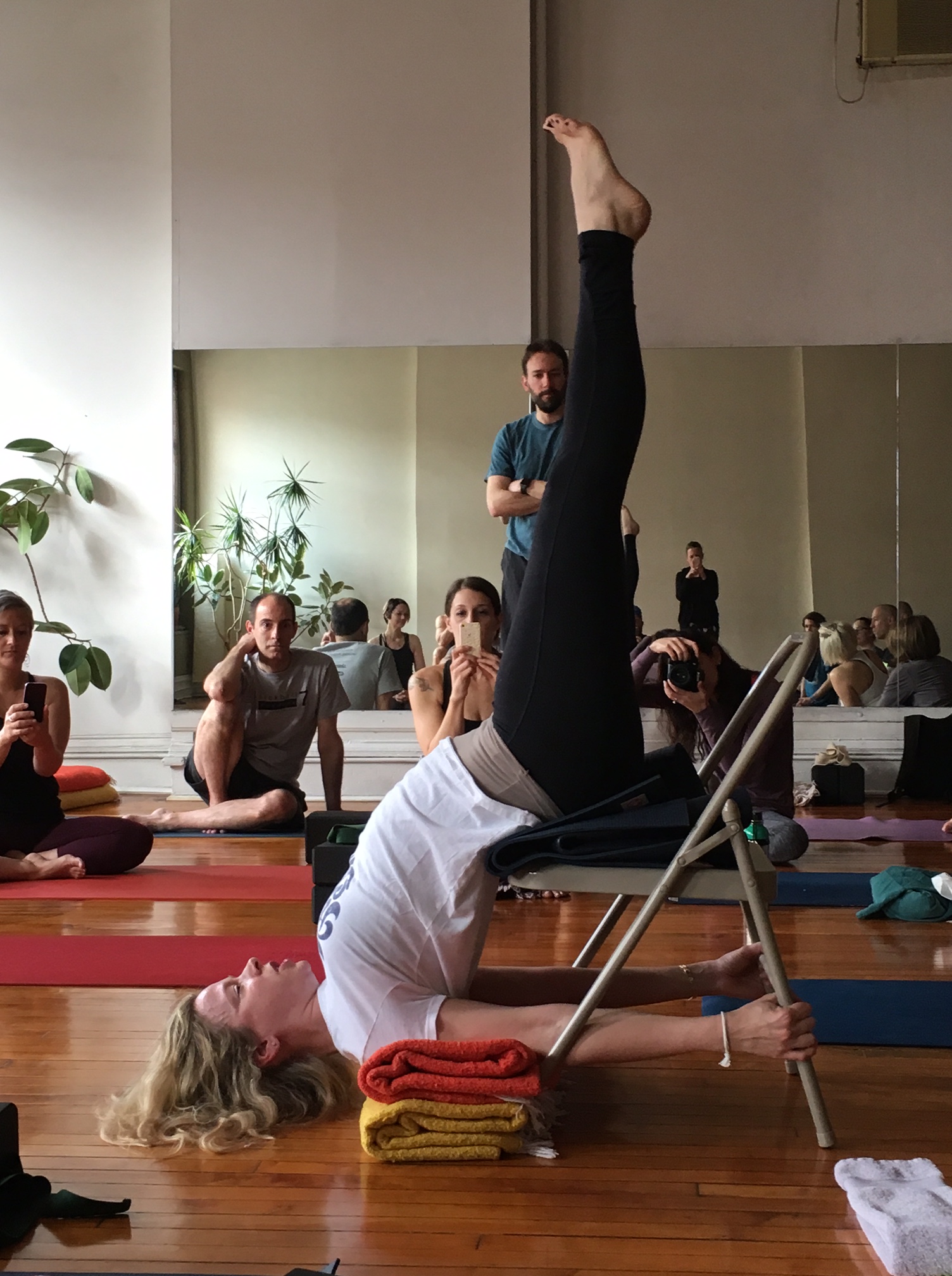 And this is the pose — a variation of it, anyway — that caused me to freak out a bit while trying to decide whether to attend Chrissy’s workshop this weekend.

Here’s your spoiler alert: I am so happy I did.

I knew going in that I didn’t have the core strength to hold a full version of shoulder stand on my own. But that’s not really what I wanted to accomplish anyway. In a class about a year ago, we did some inversion kind of stuff at the wall; I remember leaving that class feeling that inversions were something attainable. But in the time since, I lost that confidence and enthusiasm, and more importantly, I lost a sense of how inversions felt. In my regular classes we occasionally do a block-supported thing kind of similar to shoulder stand, but my legs feel like I’m treading water in a swimming pool. Without feeling the weight, I didn’t have a feel for how the pose should work. I wanted to recover that, and I wanted to remove the barriers I had constructed in my head.

As we packed up to head home after Saturday’s second session, I spoke with Chrissy a bit about being excited and nervous about the shoulder stand class. That was the right thing to do; she made a point of checking on me as she got us warmed up and explained out our options for the pose. They included doing shoulder stand from a chair — that’s the demonstration above — which I am (now, after the fact) dying to try.

I opted to approach from bridge pose — one I’m comfortable with — set up on the wall. That was a great way to do it; I could still feel how the full pose plays with gravity — the weight in my shoulders and upper arms, and the strength I’ll need in my core to hold my legs in place — while in the relative security of the modified pose.

And that was the successful end of our two-hour trip. Listening to someone talk in detail about how the pose works removed the mystery behind it; getting my legs in the air gave me back my sense of how the pose should feel. I still need to do the core work, and I will. I’m excited to keep trying, because of the workshop.

And that’s the point, right? For me, this wasn’t just about the pose (although I would be lying if I tried to tell you that eventually getting to shoulder stand isn’t a thing for me), it’s about understanding the pieces of shoulder stand and then getting back a sense of how the pose feel. Mysteries dispelled, fears dissipated.

And the best thing: taking a step outside of my comfort zone and — with the support of my teachers and friends — trusting that it would work.

It did. It was amazing. And I’m grateful that I had the chance.

My yoga workshop weekend, Day One:

See you back there tomorrow, yinz guys.

Is it wrong that I changed the template of Uncle Crappy (the blog) just so I could more easily see WordPress December snowflakes?