So. What if I tried to post every day in October?

While I decide, here’s a picture of our cats. 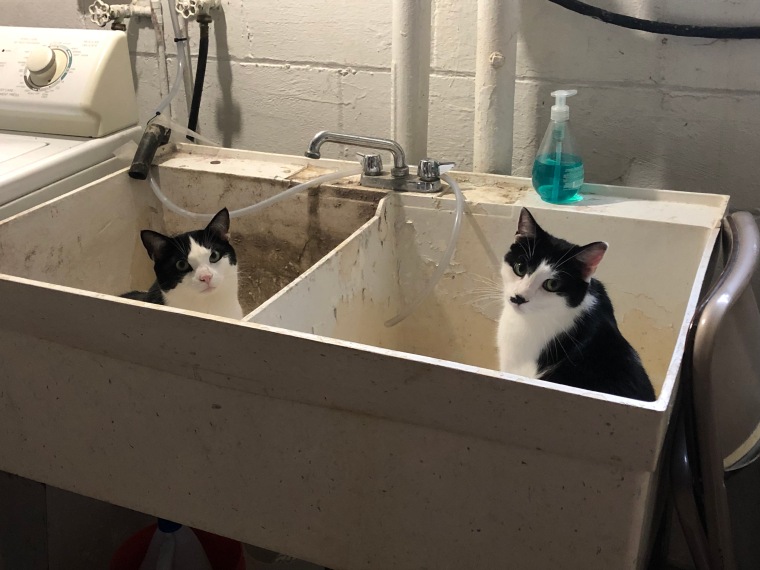 No, I don’t know what they’re doing either.

It has come to my attention — mostly because a couple people asked me about the shirt I wore to the Oteil and Friends show at Rex Theater last night — that there might be some demand for these.

Of course, I am happy to oblige. Visit the Uncle Crappy shop here. And buy lots of things. 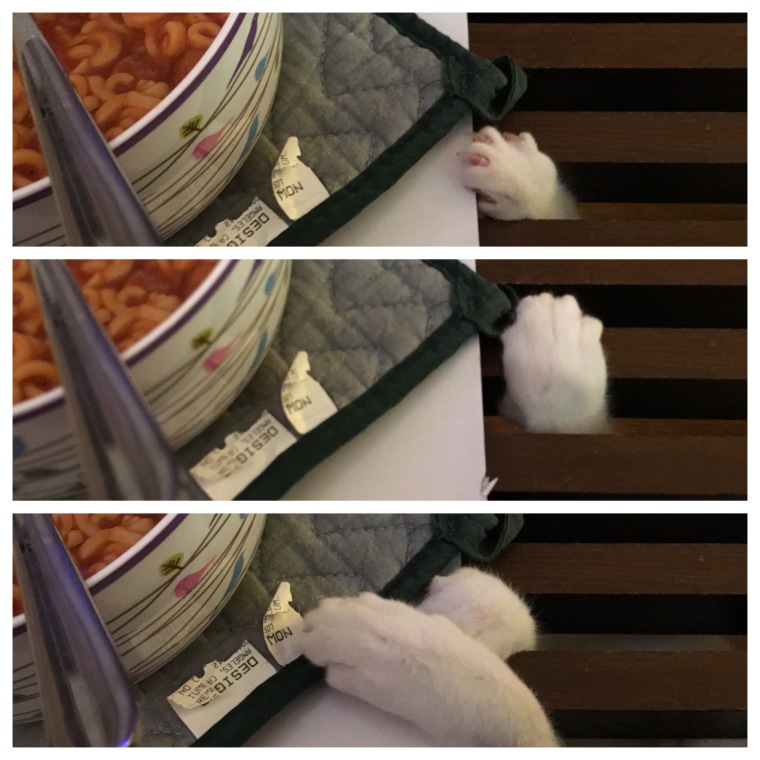 What I did: Post a pic of Cookie the kitten reaching up between the slats of our coffee table and playfully grabbing at my dinner.

What I expected: A whole bunch of AWWWW SHE’S SOOOOO CUUUUTE comments.

What I got instead: A fairly judgemental discussion of my dinner choice, which happened to be Spaghettios.

First: One serving of Spaghettios with Meatballs has 31 grams of carbs, about half of my limit for a meal.

Second: Y’all can bite me. I will always have Spaghettios in the house.

Third: I am certain the Judgey McFood people who commented on my dinner have their own skeletons in their pantries, whether it’s something left over from childhood or a bad habit left over from college days. So let’s hear it: What’s your culinary guilty pleasure?

Finally: I found this as I was looking for a Spaghettios pic to serve as the new header on my Facebook profile. Think there’s no way I’d try making a Spaghettios pizza? You. Are. Mistaken.

I should know better than to stroll through the produce section of Whole Foods A) while I’m hungry and B) just two days after I get paid. But in our most recent trip, it worked out well.

Because there it was, a display of good-sized, bright green artichokes. Three chokes for five bucks. And after a quick consultation with Mrs. Crappy, three good ones made it into our cart. And because it had been years since I’d had one — I think just once since our honeymoon — I was pretty excited.

Artichokes are difficult. They’re pointy and tough, and preparing them takes a while, even if the process isn’t especially difficult. Even eating them isn’t intuitive (“Whaddaya mean I scrape them with my teeth?”).

I can’t make them appear any less mysterious, but I can tell you what I did when we cooked and ate all three on Saturday … and I hope that will help.

Get a pot big enough to hold all the artichokes you’re cooking. Fill it about halfway with water. Into the water, you’ll add:

Trim the tops and the stems of the chokes and add them to the simmering pot tops down. Let them bubble for about 30 minutes before you start checking to see if they’re finished. When a knife runs through the stems without resistance, they’re ready to eat. Make sure they’re well drained before you serve.

I misspoke earlier. Eating artichokes isn’t difficult, but it is different. Remove a couple outer layers of leaves before you serve the chokes — they’re generally too tough to be enjoyable. Then you remove a leaf at a time, dip it into a bowl of melted butter (I like it with a squeeze of lemon juice too) and scrape the bottom two-thirds of the leaf across your top teeth.

The scraping removes the meat from the leaf — that delicious, butter-soaked meat that’s been stewing in garlic, lemons, wine and parsley for 30 to 45 minutes. And that’s How You Eat An Artichoke (Part One).

Part Two? That happens when you get down to the really flimsy leaves in the middle of the artichoke. You can eat those, sure; you can also ditch them and dig down to the artichoke’s heart. To get there, remove any remaining leaves and then dig out the the thistle-y part that’s covering the heart. Once the heart is exposed, dig out a bite with a spoon — you could eat the whole thing, but I think it tastes better to leave some of the artichoke’s outer layer behind — dip it in the butter and go to town. The flavor is unlike anything else you’ll ever encounter. It is also amazing.

Artichokes were a special treat when I was growing up, and I think they’ll remain that way now that we’ve kind of broken the seal.

But there’s nothing that says we can treat ourselves a little more often than usual. 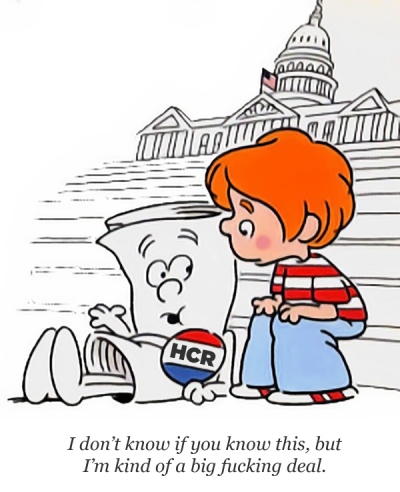 Thanks to Kim for pointing this out. And to these guys, the apparent source.

Reasons why I might be about 20 years older than my actual age:

Dixieland jazz. A wonderful affliction foisted on my by my father and his parents. Yes, Mom and Dad had Beatles/Stones/etc. records around when I was growing up. But Dad’s enthusiasm for the jazz rubbed off on me a long, long time ago. 1976: I could have been the only 10-year-old on the planet who knew the names of Kid Ory, Eddie Condon, Wild Bill Davison or Bix Beiderbecke. Come to think of it, I’m probably one of the few 41-year-olds on the planet who knows the same.

Manhattans. Again, my father’s fault. Martinis are much hipper — as are probably dozens of other cocktail options — but I like the bourbon and the sweet vermouth.

Newspapers. This is more than a professional problem for me. I do a lot more reading online than I used to, but you can’t lie on the couch and read your computer every Sunday morning. (OK. I know that actually can be done, but I’d still rather wander through an actual Sunday newspaper instead.)

The Tony Kornheiser Show. Mr. Tony occasionally gets ripped for being hopelessly stodgy, but his radio show — on XM 144 from 8:15 to 10 a.m. or via podcast at iTunes — is still his best work. It’s epic.

There’s probably more. I just can’t remember at the moment, because I’m up past my bedtime. Hey — you kids get off my lawn!