Thing you guys already know: I am a college football freak.

True, my freakishness is a bit myopic, in that nearly all of it is filtered through the lens of Ohio State football and what everything might mean for the Buckeyes. But that doesn’t diminish my freakdom, and it doesn’t mean I can’t sit in front of a TV for 12 hours on a fall Saturday, trying not to sprain my remote-changing thumb.

Let’s back up. I had been contributing to DDS for a while when we started kicking around ways to add different kinds of media to the lineup; one natural was to get together a weekly video chat where we could make NFL picks. They were fun, pretty good and the source of perhaps my greatest moment of football punditry, when early in the 2012 season I told Goon Squad Sarah that third-round pick Russell Wilson would be a better NFL quarterback than second overall pick RGIII. I will never tire of reminding pretty much everyone how right I was about that.

At some point during that season, my friend and former colleague Carla — who was not only a DDS contributor but also an actual sportswriter at the time — decided to branch out into picking college games. As I recall, the first season — and probably the subsequent two or three — were a bit erratic; we didn’t do shows every week and we didn’t really settle on a format for a long time. But there we were, posting the vids from our chats on the blog and on the socials.

As we went through subsequent seasons, we took gradual steps towards something that one could almost call “polished.” The above logo (which was all Carla’s doing). Consistent naming and format conventions. A Facebook page. And, as of 2017, an audio version — I believe the kids call it a podcast — that posted to iTunes and a whole bunch of other places. We’ve even added a correspondent — hi, AJ! — who gives us a rundown of the stupid fun Group of Five games I’m too old to stay up and watch.

We’re now in our eighth season. And I bring up the show here because we’re actually having a pretty good season so far. The format is solid, we have some fun little things we do each week and — somewhat oddly — we’ve actually been pretty good with our picks. And while I don’t want to speak for Carla, it feels like a lot of fun this time around, even after we spent the month of August boggling at the notion that we’d been doing this for eight years.

Look. This is a little show. I’m sure it’s mostly friends and family who are listening. And hey — that’s you guys. If you’re of a like mind as far as college football goes, give us a listen.

Fall used to be a lot busier than it is these days.

For most of the last two decades, about half of our fall weekends were spent driving to Columbus, prepping a tailgate party for somewhere between 10 and 20 people, going to Ohio State’s home game and then coming home on Sunday. For several of those years, we would get home just in time for me to turn around and drive to work for my regular Sunday night shift.

It was a blast. And even when we were in our early forties, it was exhausting. And now that it’s ten years later? It would be impossible.

For me, there was a turning point a few years ago, with a game against, I think, a directional Florida. It was early September and stinking hot, as Columbus can be. It also rained all the way through tailgate “party,” which mostly consisted of us huddled under a canopy, eating soggy food and trying keep rain out of our beers. And when the rain ended, it didn’t help — it just made it feel even more humid.

There was talk among the adults initially — even in my mid-40s at that point, I am not one of the adults — and several decided they were going to do the comfortable thing: Go home and watch on TV. At that point, I was pretty hardcore — even leaving the game early was something you just did not do; skipping a game entirely was out of the question.

But once the sweat became so profuse that I could feel it running down my back, I started listening: Air conditioning. Cold beer. No lines for food or bathrooms. A 70-inch television, comfortable chairs and no danger (well, not much) that someone would dump a gallon of Diet Coke down my back.

OK. I relented. And it was awfully nice.

With the exception of the mostly-annual big deal non-conference game or the home opener, the September games were the first to go. They generally didn’t mean much, and Columbus can be as hot in September as it is in July.

Next, we started paring back on the not-as-big-deal Big Ten games. You know the ones — they would be historic upsets if they happened (and they occasionally did), and who wants to brag about watching Illinois upsetting Ohio State in Cbus in 2007?

(Spoiler alert: We were there. BUT I’M NOT BRAGGING.)

Once my folks made the decision to stop going to games, this became a bit easier. We had one season, two years ago, when we had four seats together, and four of us made it to a few games that season together — and they were awesome. But there were only a couple of them, and realistically, it was too much of a chore for my folks to get into the stadium, deal with the crowd and still be able to enjoy — or even see — the game.

I’m not at all suggesting that they are responsible for this change. It was part of it, but we’re getting old too. And when we were able to do a full weekend, we were exhausted by the time we got home on Sunday.

So we don’t do it. And life is better. We did four home games last year, and we’re about to go to our second of four this season. Mom and dad still love the tailgate parties — so do we — and we’ll have four good ones in 2019. They go home and watch on TV, and we go inside the Shoe and see some college football that many fans would kill to see live.

I haven’t made too many concessions to my 52-year-old self yet, but this one has been good. And I still get to see Michigan State, Wisconsin and Penn State, have great tailgate parties with the Killer Nuts Tailgating group that’s been doing this for 20 years — and I don’t feel like I’m doing to die by the time December begins.

A couple nights ago, I was flipping channels and came across Urban Meyer’s B1G kickoff luncheon news conference from Chicago last week. After watching Urban’s far-too-brief presentation, I started feeling the familiar twitch that i seem to come up with at around this time every year.

I type the schedule into our calendar. I start thinking about tailgating food. I note the Saturdays when we won’t be traveling … but when I’ll still need to be in front of a television. The players don’t report until next week … but I’m starting to get ready now.

And if the Big Ten Network turning towards football isn’t enough, there is this surprise treat from the Associated Press: A ranking of the top 100 college football programs of all time.

And guess who’s now really ready for the season to start?

I’m watching the Browns play the Ravens in a Monday Night Football matchup that actually sounded decent when you looked at the schedule back in the summer. And this question occurs to me: Which is more unusual: the Browns scoring a touchdown or Uncle Crappy successfully finishing a National Blog Posting Month?

And we’re not going to find out today … because both just happened.

I can’t speak for any progress being made by the “professional” football team in Cleveland — actually, I can, but we’re going to save the angry #factoryofsadness rant for another time — but I’ve had a blast coming up with 30 blog posts this month. I’m not going to go back and look, but I can say with certainty that it’s been at least several years since I completed a full NaBloPoMo.

This also felt familiar, once I got into it. I often did these in November — that used to be the regular NaBloPoMo month — so the rhythm of the month definitely came back, especially with Ohio State’s regular season reaching a peak and reaching Thanksgiving, one of my favorite posts of any year.

And we had some new stuff too, especially with the adoption of Mr. Charlie, who has been passed out on the couch after an especially vicious mousie-hunting session.

This has been fun. As much fun as I’ve had here in quite a while. Blogging sometimes feels like a chore these days, and I definitely felt that way when I fell behind about halfway through the month. But I’ve also re-discovered the process that makes daily posting possible; even if I don’t keep this up every day going forward, it’s nice to know that I still have it in me.

It’s also nice to know that you guys are still paying attention. I’ve always known that consistent production of semi-coherent content is the best way to gain and maintain readers — do I do this enough that I’ve actually kept any of you guys around? — but it’s cool to have that reinforced. As I said yesterday, you’re the best part of this whole operation, and I’ll keep writing if you keep reading. 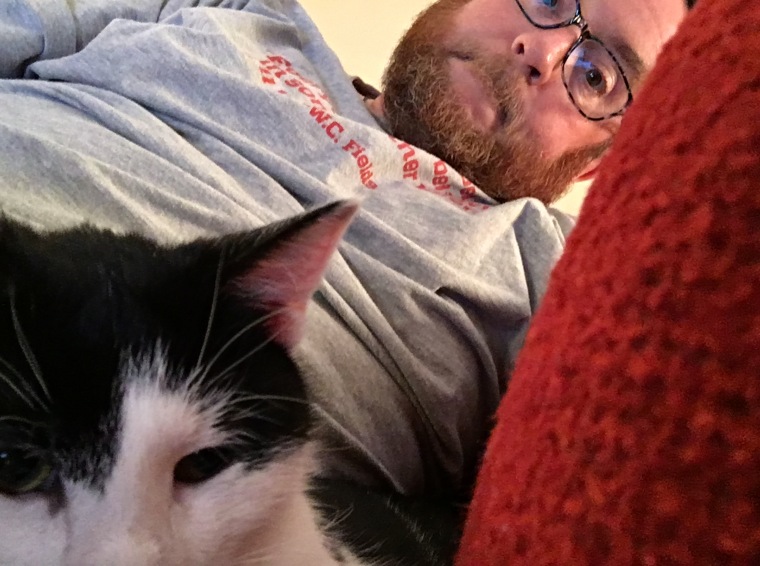 The cat is awake, and that’s all I got for the month of November. Thanks, yinz guys, for your help. See you in December.

Fred made a solo trip to Ann Arbor today. Here are two of his photos from the day.

I know what this pic, taken well before the start of the game, feels like. It’s fun, but you’re also apprehensive about the approaching afternoon. And even though you can see plenty of Buckeyes nearby, it can seem very, very lonely.

I know a little bit about what it feels like to sing Carmen Ohio on the road; I’ve done it at Michigan State and at the end of two white-out nights at Penn State. But on his first trip to a game in Ann Arbor, Fred got something that I didn’t get in two trips during the 90s: a win. 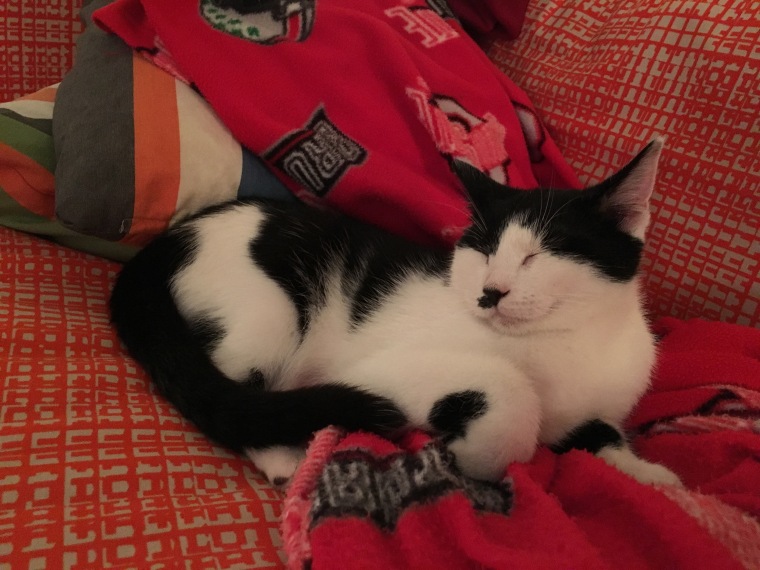 Mr. Charlie is rested and ready for tomorrow. And so am I.