Well, not quite, although I did get nearly all of The Wife’s presents wrapped, along with a couple of things she needed for her office Christmas party on Tuesday.

I’ve never minded wrapping presents; it’s something my mom taught me to do when I was fairly young, and I’ve always wrapped my own gifts since.

I’ve had professional training, too. During breaks from school, I worked for a chain of Hallmark stores in Columbus. Over the summer, I was part of the warehouse crew, tagging merchandise, delivering to the stores and setting up displays when things needed to be changed. But at Christmas, I was usually assigned to one of the busy mall stores, to kind of do everything: stocking, staging stuff sent from the warehouse, taking inventories and placing orders, helping customers … and wrapping.

You get to be good at wrapping presents when a grumpy customer — and a grumpier cashier who wants to send grumpy customer on his way — is waiting for you to finish. It usually wasn’t hard stuff; Hallmark made gift boxes of every size, so you always had the right box for whatever you were wrapping.

We had two games, usually managed by the chain’s general manager, Scott. First was picking the correct sized box, without measuring, for some oddly shaped thing somebody wanted to buy. The other was race wrapping — starting simultaniously with similar-sized gifts and seeing who gets done first. Neatness counted, too — you could get disqualified if the package was too sloppy.

I got to be good at both. In fact, I was the only staffer at the Westland store to beat Scott — who always claimed that using anything more than three peices of tape to wrap a package was wasteful — the first Christmas I worked there.

So sitting upstairs and wrapping The Wife’s presents is relatively relaxing by comparison. Until this: 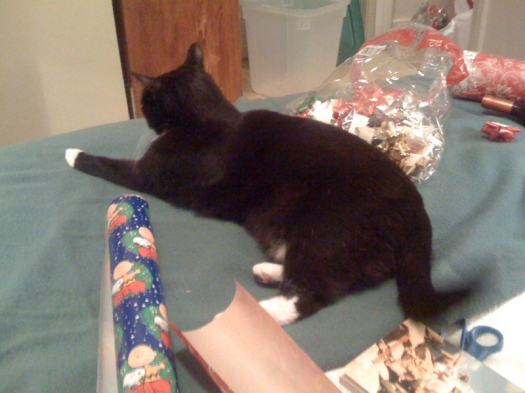 Wrapping for time? No problem. Wrapping around a giant cat who doesn’t want to move?

I can’t possibly work in these conditions.