When we set up in the parking lot outside the Spectrum, we started talking with a local about what would happen to the building once it is torn down later this year. He said there were the two Dead shows, followed by an extended run of the circus.

My response: “No no no — the circus begins tonight.”

Conventional wisdom would hold that I should be an outdoor show guy. And much of the time, that’s true.

Once in a while, though, it’s good to cozy up with 20,000 of your closest friends inside, where the sound and the lights and the cranked-up intensity can turn a barn like Philadelphia’s Spectrum into a room of surprising intimacy. 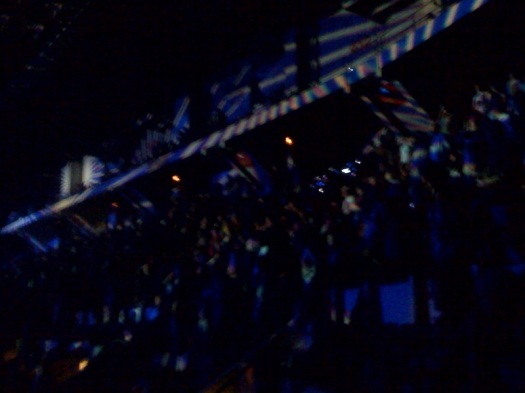 I don’t have a lot of history with the Spectrum — I’ve seen just two shows there, on Friday and a Phish show in 2003 — but in its last few weeks before it’s torn down, it does deserve a little respect. Yeah, I know, it’s ground zero for Flyers history, but you could argue that it’s ground zero for Dead history as well; it was the first East Coast venue of a significant size the band played with any regularity, and it, along with Winterland and the Cow Palace, was the reason for the development of the Wall of Sound sound system — and all the subsequent attention the band has paid to making barns sound good over the years.

It should be noted: the band was aware as well. The encore Saturday night? Samson and Delilah, with the line “If I had my way/I would tear this whole building down.”

Friday’s show in Philly was not just a nod to the past — the Dead, in its various iterations, played there more than 50 times, at least 20 more shows than Mr. Springsteen, the next-closest artist. To me, it was something of a re-birth as well. After settling on a lineup that includes Warren Haynes and Jeff Chimenti, I got the sense that things have settled down for the band — they’re never going to tour like they used to, but when they do, they won’t be starting from scratch each time.

Here’s what we heard:

Here’s what I thought:

One Reply to “goodbye. hello.”