Of all the boneheaded things the Browns did in 2009, the one I had no problem with was getting rid of Braylon Edwards.

Yeah, sure,  the team got just about nothing for him. But I’d argue that “nothing” is pretty much close to what Braylon is worth.

Our favorite ex-Wolverine took some time before the start of the playoffs to rip the Browns; he also explained that in the Jets’ offense, he’s in a much better position to showcase his world-class receiving skillz, something he never had the chance to do when he was leading the league in dropped passes in Cleveland:

When you’re supposed to be this big-name receiver and you’re only getting two or three balls a game and you’re losing, it frustrates you … Here, they’re committed to winning football games and everything else is secondary. They don’t worry about petty things here at the Jets organization.

Hm. According to the stats, Braylon caught 55 balls for the Browns in 2008, for 873 yards and three touchdowns. So his assessment of his final full season in Cleveland is dead-on: mediocre at best.

He played four games with the Browns in 2009 before the trade sent him to New York, so it would stand to reason — in Braylon’s mind, anyway — he would have been much more productive in 2009. The regular-season stats: 45 catches, 680 yards, four touchdowns.

Wow. Pro Bowl numbers for sure.

As was the case during the regular season, the Jets apparently didn’t need much help from Braylon while they pretty much beat the Bengals senseless over the weekend. And that’s probably a good thing, given that all Braylon did was show he’s consistent at one thing and one thing only: 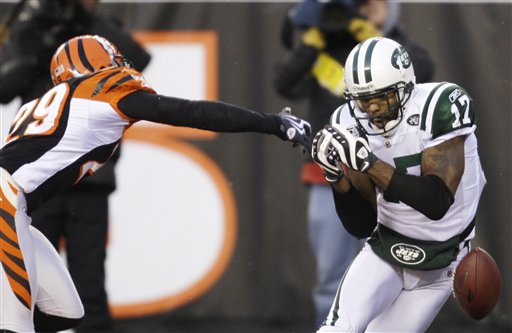 Whoops. Nice catch, butterfingers. Enjoy being a non-factor in the playoffs.