I have plenty to say about this weekend’s Ohio Tour, but I accidentally completed something on the way home today that I don’t think I’ve ever pulled off before: the Great Ohio Crap Food Trifecta.

This started early Sunday morning, as we returned to our hotel after the Saturday show at Blossom. Neither of us had much to eat during the day, and we were famished when the show let out around 11:30 Saturday night. To our delight, the Donatos Pizza near the hotel was still open when we drove by. That’s part one: a 12-inch pep and onion, scarfed down while still sitting in Mrs. Crappy’s car. 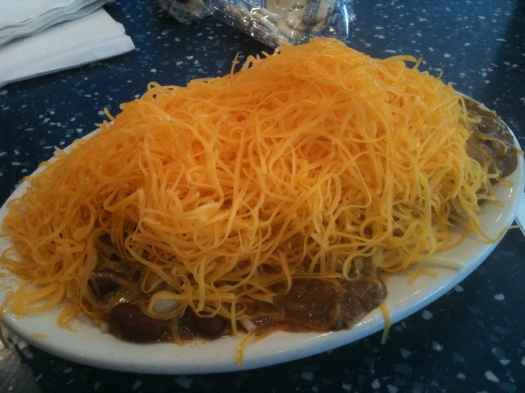 The next one came up Monday morning. Mrs. Crappy found a local chili parlor chain with a shop near our Cincinnati hotel; she was fired up about breakfast — usually a meal I never pass up — but at 10:3o this morning, I opted for a five-way chili instead. Part two: Cincinnati chili.

I had skipped over what became the final portion of the trifecta several times after the Riverbend show. It would have been easy to jump off I-275 and hit a White Castle drive-through on the way back to our hotel in Mason, but we were tired and not too hungry, having scored a couple of killer veggie burritos in the lot after the show. But as we passed through Columbus this afternoon, we decided to take a look at the beer selection at the Pickerington Anderson’s store, just in case we ever need to make a quick stop there. The beer selection was passable — the Dublin one blows it away, if you’re wondering — but as we pulled away from the store, I asked Mrs. Crappy to pull in the White Castle across the road. It didn’t really have anything to do with being hungry, but I felt like I really needed the two hamburgers I had anyway. Part three: White Castle.

No, not the smartest eating choices. But I had the chance, and I went for it. Just do me one favor, OK? Don’t tell my doctor.

I have plenty more to say about this weekend, including the shows, an odd Sunday, our visit to Blue Ash Chili and our non-breakfast a day earlier. I have to make a sensible dinner first…