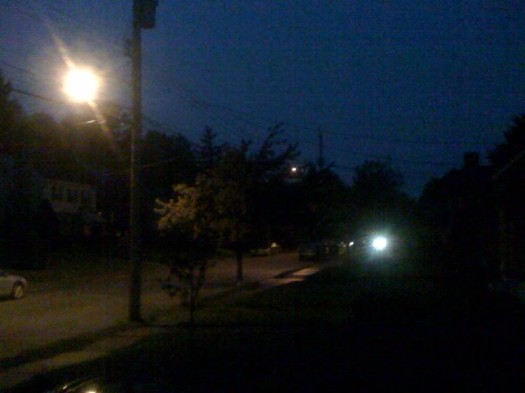 It was still dark at 6:45 this morning. A little misty, a little cool.

And not once did I think about going back to bed.

No, I wandered around the neighborhood for about two miles. A little more walking than running. The running part felt pretty good, and when the nice British lady on Couch to 5K told me to go, I tried to avoid lapsing into a shuffle. It worked.

About 35 minutes later, I arrived back at our house. I didn’t throw up in anyone’s yard. I didn’t feel like collapsing in a heap on the floor when I went inside.

And I even thought I might do this again.

Something that helped: The reaction from a bunch of you to yesterday’s post and the links I posted elsewhere. And the reaction I got when I signed up for Daily Mile this morning. I am set up with a list of races that’ll come around at just about the time that I’m finishing C25K, and I already have a couple volunteers to run with me when I pick one. Very gratifying stuff, especially for someone who’s just starting.

And that’s the point of doing it this way. I’ve tried before, but I didn’t tell anyone what I was doing — and that made it way too easy to quit. I know I have a bunch of people watching — and supporting me — this time; and I know they’ll let me have it if I slack.

Again — no promises beyond the short-term stuff. But I feel pretty good about the start.