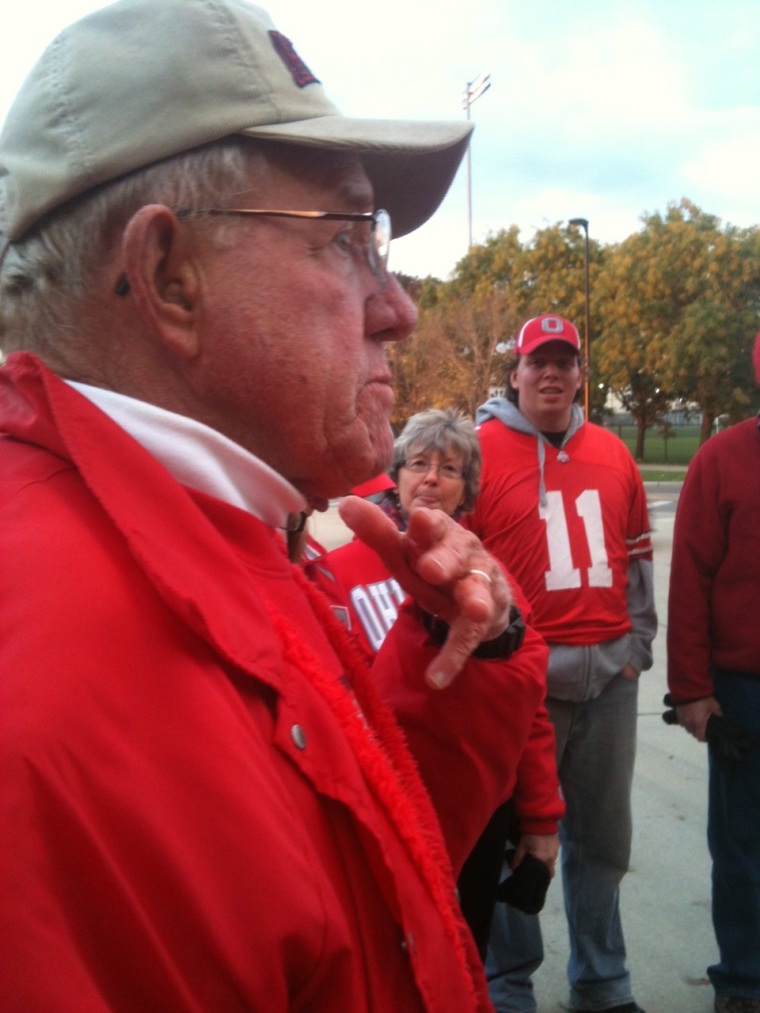 We’re a day away from another home football game, and I have my regular football partner with me tomorrow. That wasn’t the case a week ago, but it worked out pretty well anyway.

I’m always a little out of sorts when Mrs. Crappy can’t come to a game. She’s been my partner in Ohio Stadium for even longer than we’ve been married, and when she can’t come for some reason, I miss her terribly.

That was the case a week ago, when Mrs. Crappy was recovering from the nasty cold and didn’t come out to Columbus. It was the case for my dad too, as my Mom, who had been sick all week, came to the tailgate party but didn’t stick around for the game that night.

Mrs. Crappy’s been my official football partner for more than a decade now, but my Dad and I go back even further. My first Ohio State game was with him — a Wisconsin game, no less, in 1974. Long before I was in high school, he made a point of taking me to what would be the last game between Upper Arlington — for whom I would play several years later — and Bishop Watterson, the local Catholic high school; that rivalry was ending as UA moved to a new conference, but I mostly remember the pre-game meal we shared at White Castle. There were Browns games in the old Municipal Stadium in Cleveland, including one bitterly cold game in which Cleveland secured a playoff berth.

And there were Ohio State games. Too many to count in the stadium — I was the default choice when mom decided it was too cold or rainy to go — and even more on TV in our house or elsewhere.

I am the way I am, in terms of football, because of him. He’s a little more understated these days, but the stuff I remember:

Has this rubbed off? As I gave what can only be described as a totally over-the-top pep talk at the end of our tailgate toast on Saturday, I heard someone say to my father: “Yeah, he’s your son.”

Father and son got to watch a remarkable game on Saturday night. Ohio State’s first late touchdown — the long Braxton Miller run — had both of us jumping up and down — something that’s not easy for Dad these days. We reacted differently to Miller’s long TD pass, though — as the stadium erupted around us, we could only look at each other in disbelief.

He’s got a few more games on me — to the tune of 20 seasons or so — but neither of us could come up with one that compared to last week’s win against Wisconsin. We saw an all-timer. And I got to share it with the guy who is the reason for me being the fan I am.

I get to watch this week’s game with Mrs. Crappy, and I’m happy she’s back. But I will always be grateful for — and I will never forget — last weekend.