One of the most fun things about the new house is watching Miles’ reactions to everything he discovers. And without question, his favorite thing is the basement.

Several times each day, he’ll plop himself down in front of the basement door and beg — pleasepleasepleasepleasePLEASE — for one of us to open the gates to paradise. Once the door is open, he’s gone, thundering down the stairs, and you can almost hear the Raiders of the Lost Ark theme music in his head as he runs.

We’re not sure what the attraction is, or what he does when he’s down there. But as the basement is the catch-all for the stuff we don’t have have a place for yet, so there are stacks of boxes and furniture and other dark nooks and crannies that he apparently loves to explore.

Sometimes he could stay down there for hours — as he did the first weekend after we moved. He found someplace that was nap-worthy, and we didn’t see him for hours, not even when we looked. But short trips seem to be OK too, and either way, he’s usually good about coming back upstairs when we ask. 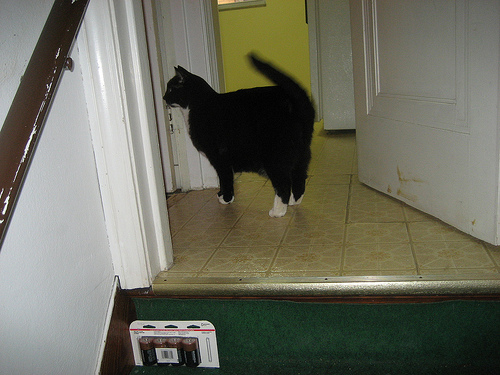 And the adventures are apparently exhausting. I know he looks alert here, but he was sleeping under the couch not ten minutes after this picture was taken.