This hasn’t been a good holiday season for the Big Ten. I’m hoping that changes tonight.

With the exception of Iowa, Big Ten teams have been crushed over and over in this year’s bowl games, most notably in the Rose Bowl last week, when Southern Cal buried Penn State.

I have a double shot at redemption tonight, though, when Ohio State plays Texas in the Fiesta Bowl. A win by the Buckeyes would A) boost the fortunes of the conference that’s been everybody’s whipping boy for the past several seasons, B) redeem Ohio State’s program, which has been tarnished by two straight losses in national championship games and that fiasco against USC in September, and C) make Uncle Crappy a very happy boy.

There’s no question that Texas will come into the game with the motivation of a team that feels it should be playing in Thursday’s title game. Another ugly loss for my Buckeyes is a possibility.

But I’m thinking our seniors also are going to have something to play for — like putting two-plus years of brutal criticism behind them. Like setting the table for the youngsters who will have to play Southern Cal again in 2009.

Like making sure I don’t have to spend another off-season answering questions about my football team. Again.

I know Texas quarterback Colt McCoy is much better now than he was in 2006. But I’m wondering whether he’ll see No. 33 and the rest of the Ohio State defense across the line of scrimmage tonight and start having flashbacks to the beating he took in Austin back then. 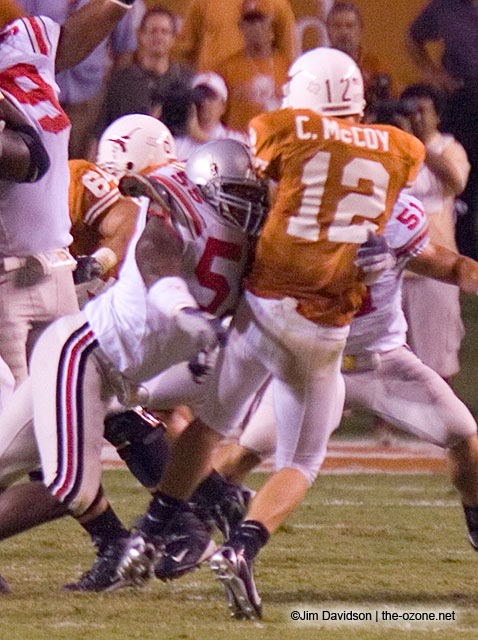 The score of the 2006 game — 24-7 — wasn’t a true reflection of Ohio State’s domination over the home team that night. And I wouldn’t expect Ohio State to dominate tonight’s game, even in a win.

But: Colt? Those sacks look like they hurt. Try not to get all twitchy tonight, OK?