With a couple of notable exceptions — the new bridge to Parkersburg that cuts as much as a half-hour from the trip and the new Baker Center looming over the lower end of Court Street — the 2009 Athens is very much like the 1995 Athens. Or the 1985 Athens. A late April Friday in southeastern Ohio now is every bit as glorious as it was 15 years ago.

That’s what met us Friday afternoon — sunshine, 75-degree temperatures and even an easy parking space on Court.

Mrs. Crappy and I kicked around uptown while we waited for Fred and Ethel to arrive. Ran into a couple people we knew. Stopped by The Union, where we found a new bar lit with blue neon — but, really it was the same place it had always been.

As soon as the Columbus contingent arrived, we found a booth in the Casa Cantina; we loaded it with beer, margaritas, chips and salsa while we waited for our names to be called for dinner.

We last visited Athens in 2005, and since that trip ended I knew what I wanted for dinner the next time I was back: three-layer stacked enchilada with tofu, black beans and the house hot salsa. It used to be that Casa was the only place I would eat tofu; that’s changed, but I still think they do it better than anyone else.

After the show, things were a bit fuzzy, but there was beer at The Union. And, really, I don’t need much else, right?

Saturday morning started the same way — get out of the hotel and grab a table at Casa for coffee and a long breakfast. More wandering around uptown, this time with Fred and Ethel, as Athens woke up.

Mrs. Crappy and I were a little sad to see a closed-up Baker Center on Friday afternoon; we were overwhelmed to see its replacement. We didn’t go through the entire new Baker Center — that might have required an extra day — but the thing is enormous. 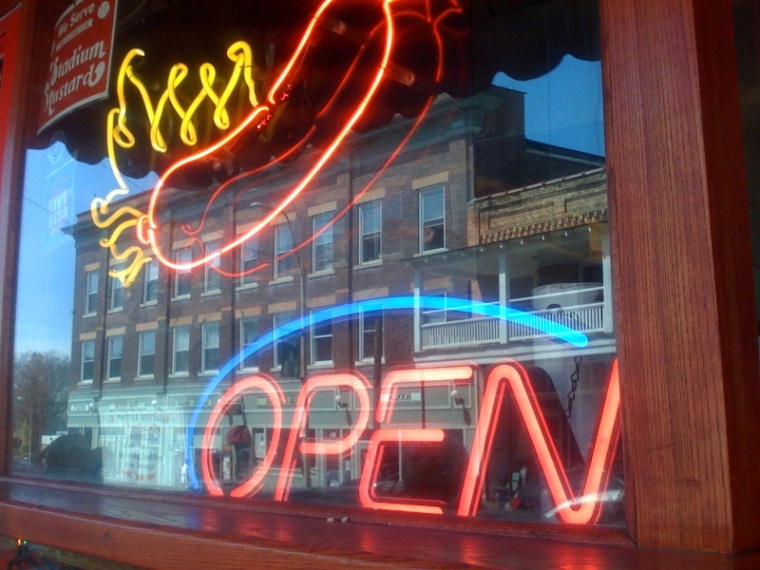 The last bit o’ fun? Lunch at O’ Betty’s Red Hots, the hot dog place across State Street from Casa. Our friend Bob had just opened it when we last visited town, and it is still every bit the kick-ass place it was then. After two Casa meals in about 12 hours, I probably didn’t need a chili dog just before we started the drive home, but, yeah, it was totally worth it.

Hell is Chrome / Company In My Back / You Are My Face / Shouldn’t Be Ashamed / Pot Kettle Black / Muzzle of Bees / I Am Trying To Break Your Heart / A Shot In The Arm / Handshake Drugs / She’s A Jar / Misunderstood / Jesus etc. / Impossible Germany / Side With The Seeds / Poor Places > Spiders (kidsmoke)
———-
The Late Greats / Hate It Here / Heavy Metal Drummer / Walken / I’m The Man Who Loves You
———-
Kingpin / I’m a Wheel

The only other time I’ve seen Wilco is in the middle of Point State Park, five years ago during the Three Rivers Arts Festival. I loved the setting, and I had a great time at the show, although I wasn’t especially familiar with the band’s music since AM and Being There.

On Friday night in Mem Aud, I saw a band I knew very well, in a relatively intimate space — and that band roared for two hours.

We didn’t hear anything from the record Wilco will release in a couple months, but that might have been the night’s only disappointment. From where we were sitting — which was pretty close, by the way — we saw and heard a confident band, one that could switch easily from the quiet, loping pace of Jesus etc. to the noise of I Am Trying To Break Your Heart. I said this immediately after leaving Mem Aud to head uptown — I saw nothing Friday night that would make me think that Wilco isn’t the best band out there today.

I was also pleased to have a theater full of people who were ready for the show. High energy, all night. That always makes a band better, and it makes a show that much more enjoyable.

I mentioned before how familiar and comfortable Athens feels to me, no matter how long I’ve been away. That’s always been the case.

Apart from the show, Saturday morning might have been my favorite point of the trip. I couldn’t begin to count how many times the four of us met at Casa for a weekend breakfast. It was enough that for a while it was routine. Coffee with honey, leafing through a copy of the Dispatch and, if it was a Saturday, maybe a bloody mary or two.

That’s what Saturday morning felt like to me and it made it a little tough to leave when it was done.

But things were different when I woke up from my nap in the car; we were just going past Bridgeville, and I started thinking about getting home. We needed to cut the grass. We needed to get some hamburger to toss on the grill. We needed to start some laundry. At our house.

On the way we stopped briefly on the North Side to drop off a gift we picked up for a friend. Her friends know us too — they asked if they’d see us out later on.

It shouldn’t be a surprise to anyone to hear me say Athens will always be like that for me. But, upon our return to our real home, I was a little surprised to find that Pittsburgh felt that way for me too.