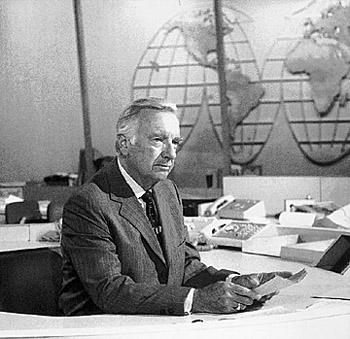 When I was a kid, my family’s evening routine was pretty simple. It revolved around two things: dinner and the CBS Evening News.

My folks were pretty strict about television and the dinner table — generally the rule was once the food was ready, the TV had to be turned off. But once my sister and me were old enough, the news was an exception. And by “the news,” I’m talking about Walter Cronkite.

Cronkite told my parents the news when John Kennedy died in Dallas. He was the narrator when, 40 years ago, Apollo 11 landed on the moon, something I imagine I watched, but don’t recall. I do remember Cronkite explaining the Watergate hearings, a seemingly endless process to a 7-year-old boy.

I remember watching him just about every night. And I remember at some point, in the late 1970s, and starting to think about the news business, because I had been watching him for my entire life. I first thought about broadcast journalism, even to the point of spending a day at one of the local stations in Columbus — the CBS affiliate, naturally — because that’s what I wanted to do.

I discovered during high school that I could write pretty well, and veered away from the broadcast side of the business. But I never could shake the idea that the news was important, and that being in a position to relate and explain what was going on in the world — whether on a nationally televised newscast or in a 50,000-circulation newspaper — was a noble and worthwhile way to spend my professional life.

It might be a stretch to say I owe my career to Cronkite, but there is no question I started thinking about a career in journalism while watching him at the dinner table, night after night, for the first 15 years of my life.

One Reply to “uncle walter.”