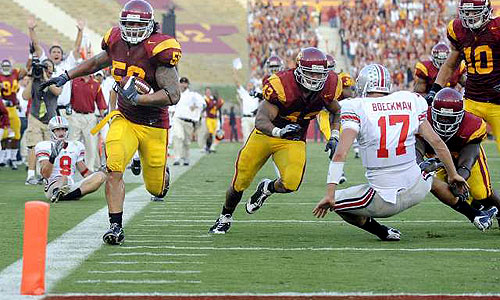 As it turned out, there was a good reason for that.

Without Beanie Wells, with an overrated offensive line and with a defense that wore down in part because its offense couldn’t stay on the field, Ohio State didn’t have a chance against a veteran USC team last fall.

If you’ve listened to the experts all week, you’d think I don’t have any reason to feel differently about tomorrow’s game.

A loss would serve to reinforce everything I’ve heard for the last three years: Ohio State still can’t win against Top 5 opponents. The Big Ten is still a joke.

But I think by this time tomorrow, that’s going to change. Ohio State can’t right the wrongs for the entire conference — even though that’s the position we’ve been put in, since the rest of the conference hasn’t been willing to give us much of a hand recently — but a win over SC will go a long way in restoring a little respect for what’s been happening in Columbus for the past several years.

Our defense will be able to key on the run. Even without Beanie, I think our offense is better that last year’s version. SC’s defense is even younger than ours, and its offense is led by a true freshman who might as well have been playing against a decent high school team a week ago.

And I guarantee you this — that kid hasn’t ever seen anything like Ohio Stadium at night.

It’s going to be tight, boys and girls, because, god help me, that’s how we do things. But by this time tomorrow, Ohio State will have taken a step towards restoring its national reputation. I’m thinking a score of 20-17 sounds about right.

I guarantee you one other thing as well — my voice won’t be back until Monday.