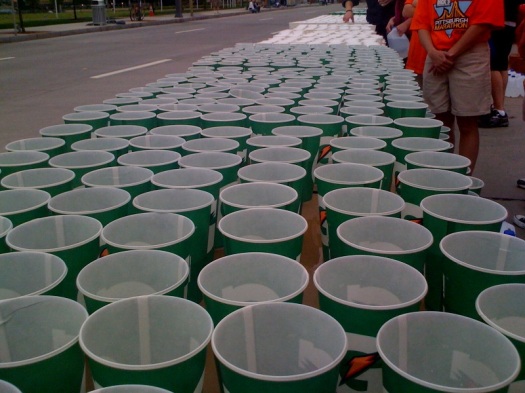 I generally frown upon any activity that requires me to get up before 7 a.m. — much less one that forces me to set an alarm for 5:30 — but I have to make an exception for today. Not only did I have a kickass time slinging water for the runners at the Pittsburgh Marathon, but I got to see and personally yell at cheer for nearly every one of the runners I was looking for today. 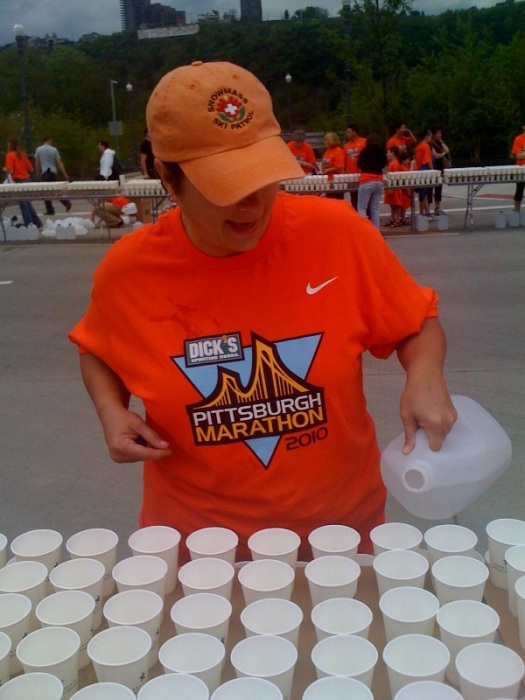 I’m not sure whether anyone at the Mile-7.8 water station had actually done this before, but the team leader, an executive for the Allegheny County YMCA — along with some of our bossier YinzTeam members — got everyone whipped into shape before the runners started arriving. Mrs. Crappy, AAA, Beth and I got a couple tables set up on our own — two stacks of water-filled cups on each one — while Abby, AJ, Jen, Jaci and Mark worked on tables across the street. 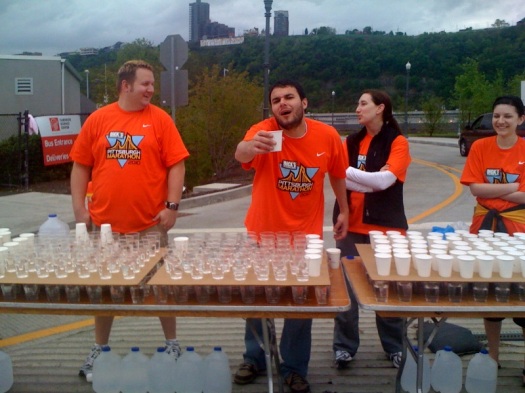 The first people through were the cyclists, who were flying, to the degree that they didn’t even slow down to think about getting some water (which they already had with them, actually). The next group through were the front-runners, and I was blown away. These guys — men and women — were nearly eight miles into a freaking marathon, but they looked to me like they were sprinting. A couple took cups of water, but most of the lead group just blew by.

And then there was the fun part. Big groups followed soon after, many of them clustered behind pace-setter’s signs so they could keep up with their own goals. We cheered and handed out water for about 90-minutes straight before the numbers slowed to a trickle. Sometimes we cheered for team T-shirts; sometimes we were able to pick out names on their bibs and offer some more personal encouragement (Mrs. Crappy thinks I startled a couple people when I did this, but most seemed to light up when they heard their names).

I wish I had some pix of the actual runners, but we were pretty busy once the herd started filing through. But being busy and having fun interacting a little bit with the runners made the time fly — and it made me not notice the soaking rain that kept up most of the time we were out there.

It was also really cool for me to hear how appreciative people were towards the volunteers. As we were cheering for them, a huge number of them were looking at us and thanking us for standing out in the rain with them.

The best part? That started when Grandpa, who joined us for a beer Saturday afternoon before meeting law-school friends for their pre-race dinner, appeared in front of me just as I turned back around with fresh cups. He was doing great. I think I surprised Jason when I saw him approaching and yelled his Twitter handle (HEY CRANBERRYPERSON), but I got a fist bump from him too. Kelly, whom you know as @aPSUmama, found me, said she was doing great and kept going to a solid finish. We yelled at Pam — who set a personal best for the half on Sunday — from across the road just after she found the YinzTeam table over there. And Dudders not only managed to hit up both YinzTeam tables but took a cup of water from me on the way to completing a relay with the rest of our heroic YinzTeammates: Lokay, Woy, Adrienne and TehJim.

I missed a few — Deanna, Julianne and Sarah, all of whom commented on my pre-race post a couple days ago, and Eric, who finished his second full marathon today. In fact, all of them finished what they started, whether it was a relay, a half or the whole freaking thing. I’m seriously impressed by anyone who who gave it a shot, but I’m especially proud of my friends who we saw — or didn’t see — and what they accomplished Sunday morning.

And I saw nothing — not even a few cases of bleeding nipples — that made me think I shouldn’t do this next year. Attempting my first half marathon at 44 is probably pretty stupid, but I do stupid things all the time — so why the hell not?