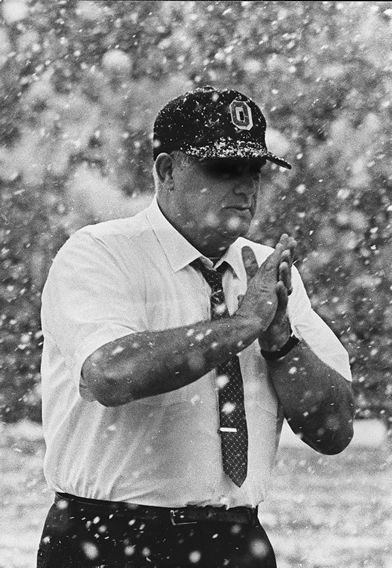 I’ve kept most of my college football talk over on the new blog this season, because I wanted to have something to say over there (and it’s going very well, thankyouforasking).

Ohio State has just three more games this season — two rivalries (including the greatest rivalry game in any sport anywhere) and a road game that will go a long way in determining who gets the Big Ten’s automatic berth to the BCS. That’s the first great thing about November football — that’s when the important games seem to come up on the schedule, the ones that decide what kind of season you’re going to have, or the ones that you look forward to every year because those are the teams you want to beat more than anything. Or both.

I also love November football because it finally feels like football. Part of my disdain for the SEC, and its stadiums lined with flowers and hedges, is that they don’t know what November football is all about. The weather in Columbus can be gorgeous in November, but it can also be raw. And we don’t care. We dress for it, we make chili or stew for the tailgate party, we make sure there’s enough whiskey in the flask and we cheer that much louder. This is Football Weather, and I wait in anticipation for it all year.

Ohio State had a bye last weekend, so our three-game November Football slate starts on Saturday, at home against Penn State. Ohio State plays big games every season, but with the exception of Michigan, there is no team on the schedule I want to beat more than the Nittany Lions.

And I am so ready.

It’s not going to be snowing on Saturday morning when we’re setting up tables and chairs and stoves and grills, but it’s going to be brisk while we cook and eat and drink. There will be steam rising from the practice field south of the stadium when Ohio State’s band warms up before Skull Session. Fred and I will throw the football in the parking lot as we always do, and we’ll have to blow in our hands to keep the ball from stinging when we make a catch.