I look good in black. But I’m a lot more comfortable in brown and orange.

I had a Moment of Weakness on Friday, and it led to ask a question that had never hit me in the 16 years I’ve lived in western Pennsylvania. I also asked you guys for advice about how to handle this question about my pro football identity, and most of you came through with honest, thoughtful responses.

Before I get to those, though, I should tell you about my test on Saturday. After I finished up a work assignment in the morning, Mrs. Crappy and I headed to the Strip, to get some lunch and find some Aloha kitsch for our upcoming Groundhog weekend. To further set the scene:

And you know what happened?

I helped Mrs. Crappy look for a black and gold scarf. We stopped at many of the tables set up along Penn to check out the new stuff. Although I had plenty of opportunities, I wasn’t tempted to buy a single fucking thing.

The comments I got on Friday’s post — here and on Facebook — were somewhat predictable, but also helpful. Most of the Stiller fans said they were ready to welcome me to the fold. The people who have a more thorough idea of my football past said I should know better than to even consider changing my mind.

But the one comment that resonated the most came from Kim, a lifelong Red Sox fan who A) knows a little bit about suffering for your team and B) knows how good the payoff is when it comes. Her point? Jumping on that black-and-gold bandwagon would be fun; it would also inevitably become hollow, because that’s not where my heart is. 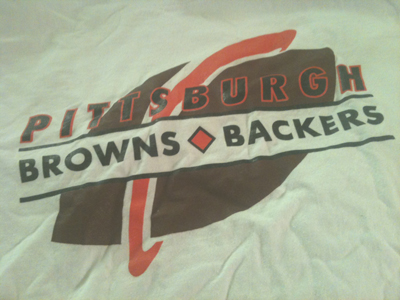 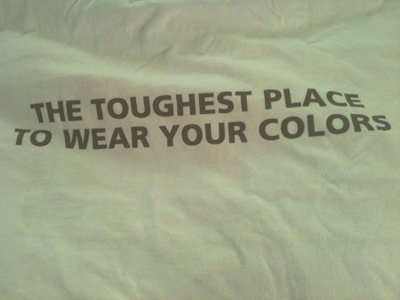 I also found this. That’s the front and back of my old Pittsburgh Browns Backers T-shirt. Between regular Sunday shifts for several years and our travel to Columbus for those other football games, I haven’t been able to watch a game with the club for years; the two seasons I was able to hang out with those folks were among the most fun I’ve had as a pro football fan (and yes, those were after the team returned to the league). The team was probably even worse back then, but being with like-minded people helped a bunch; it also made those rare wins even better.

That is who I am. I may still be pissed about the current state of the team, but it is still my team. And it always will be.

On Friday I asked you guys if I was loyal or stupid.

And if you don’t like it, you can kiss my brown-and-orange ass.