A few posts ago — which, thanks to my neglect of this blog, equals almost six weeks — I told you about Chachi Plays, the 24-hour gaming marathon our buddy Chachi put on to raise money for Ginny’s Make Room For Kids charity.

Because I’ve been neglecting my blog, I failed to tell you that Chachi Plays was a raging success. Chach made it through the entire 24 hours and managed to stay up for a victory dinner at the downtown Sharp Edge; he played Tetris, Madden, MarioKart, rugby, NASCAR and a bunch of other games I didn’t recognize (because that’s the way Mrs. Crappy wants it).

Chachi would tell you that number is his reward, because that will go a long way towards helping some kids relax while they’re staying at Children’s Hospital of Pittsburgh. But he got some deserved recognition today, when some friends, including Mrs. Crappy, hauled him before Pittsburgh City Council so they could give him a proclamation designating March 2 as Anthony “Chachi” Walker Day in the city of Pittsburgh. 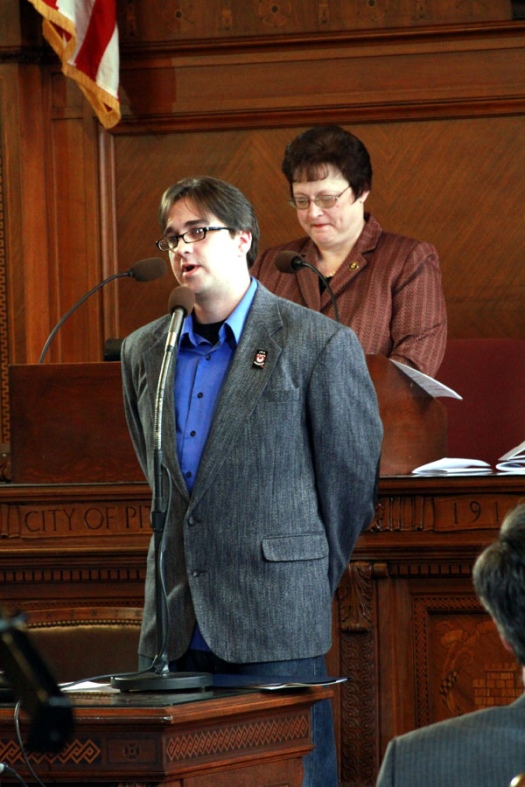 I’m not sure if Chachi knew he would be expected to speak after receiving his proclamation this morning, but, as he always does, he did very well. His explanation was simple, something like this:

I’ve played these games my whole life, and I understand the fun and relaxation they can bring. The kids in the hospital are facing all kinds of pressures, and they deserve a chance to wind down from the tests and treatments. And here’s what I did to help.

Bang. Simple and straightforward. And good enough to raise $3,000 to help those kids out. Because, as Chachi said, no matter what medical problems they’re facing, they still should be kids.

If you click on the pic of Chachi standing in council chambers, you’ll go to the Flickr set of this morning’s proceedings, as shot by our talented friend Veronica. Thanks, V_Rock, for letting me borrow the pic.