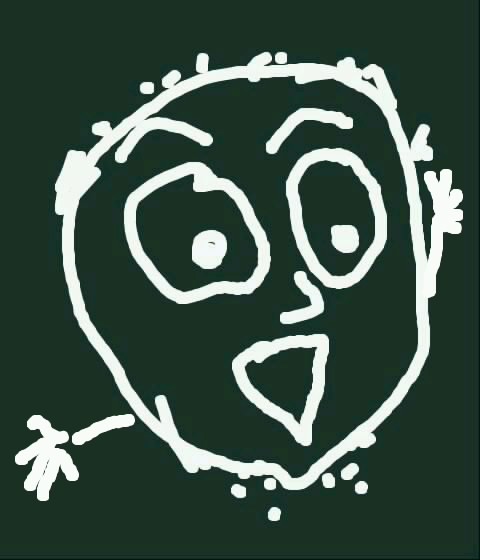 You may have already seen this picture on the Internet, but you haven’t heard the story behind it. Because I apparently wrote about it only on Plurk years ago.

This has to do with the startling notion that people you’ve never met might recognize you because they read your blog or follow each other on Twitter or Facebook. When it happens, it’s funny — and a little startling.

It’s happened to me maybe a half-dozen times in the last five years, but the first time was the best. I was sitting in front of a computer at the Carnegie Library in Oakland, trying to figure out if a CD I was looking for was out on loan. I was sort of in my own world, so I almost didn’t look up when a woman with an armload of books quietly walked up and asked:

“Excuse me — are you Uncle Crappy?”

The woman was Gina, and while I would have met her at some point, I was awfully happy she introduced herself that day. But when it happened, I was completely stunned that someone would have A) recognized me and B) had the guts to stroll up and say hi (although I know now that Gina pretty much has no fear about that kind of thing).

I’ve often wondered what my face looked like when Gina approached me in the library. I even mentioned that Friday night in the midst of a Twitter conversation that started with Michelle mentioning that she had accidentally worn her YinzTeam softball jersey — complete with her online name Burghbaby on the back — to a neighborhood block party. Michelle likes to keep her online stuff separate from her personal life, so, yeah, oops.

When I said I wish I could have seen my reaction to Gina, she disappeared from Twitter for a couple minutes — and returned with a version of the above drawing, an artist’s rendering of my face at that moment (actually, this version was her second shot; she added the jazz hands after I uploaded the first one as my new Twitter avatar).