What we learned at tonight’s Iron Chef Point Breeze Crabcake Cookoff: Kim and I are both pretty good at this. 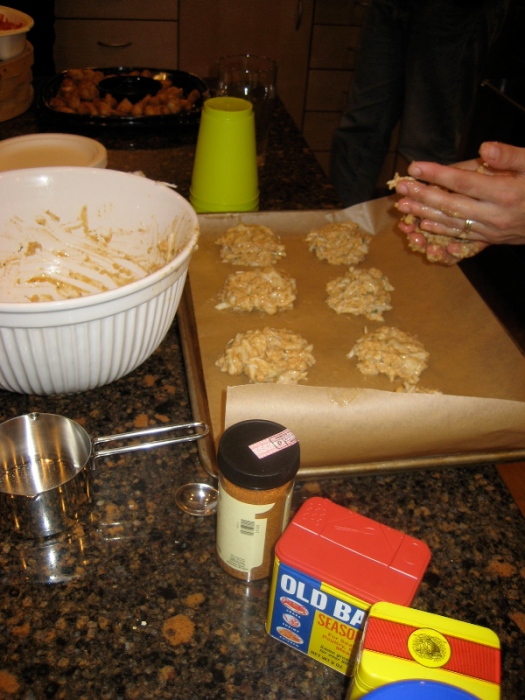 We’re still not quite certain, but it appears I won the battle, which will get me a growler of something from East End — Black Strap, most likely — when we get around to it.

This had to be a tough one for our judges, though, because our final products were eons apart in terms of style. My cakes tend to be a bit sweet and a little spicy — tonight’s were a bit spicier than I usually intend — while the recipe that Kim nailed earlier this week was much closer to a traditional Maryland crabcake — meaty and rich with hints of Old Bay and an excellent chili powder she found at Penzeys. 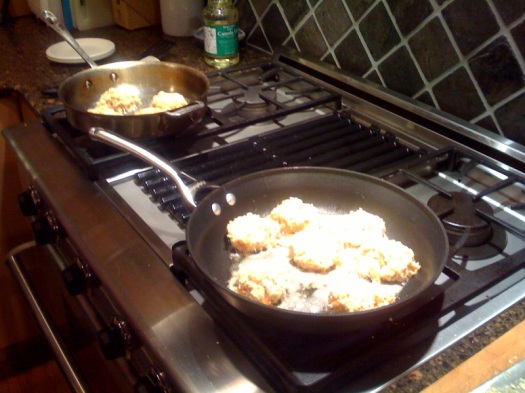 I’m on record as saying I’m generally pleased with my crabcakes. But Kim’s were fantastic too, and it was great to taste two such disparate styles side by side.

My admission for the evening: I made mine incorrectly. All those freaking extra cracker crumbs were there for a reason; I’m supposed to dredge the goopy cakes in the crumbs before I chill ’em — and I kind of forgot about that step. I coated the tops of the cakes with the crumbs and hoped they would hold together if I fried that side first. That part worked OK, but I’m wondering whether that omission is what made my cakes a little spicier than usual.

As tough as it had to be for Amy, Scott and Danielle to make a decision, I didn’t hear any complaining from anyone, although I think Kim’s son was a bit disappointed we weren’t making cupcakes instead.

Thanks to the judges and everyone else who was along for the ride. Special thanks to Kim for the use of her fabulous kitchen for the evening. That was a great night, yinz guys.

Now — anyone else want a piece of me?