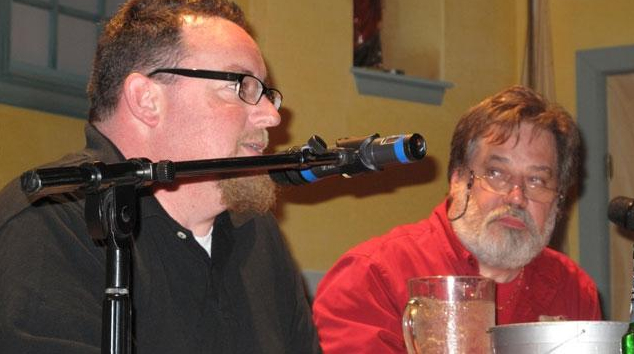 I got to the Cabaret at Theater Square a little after 5 Tuesday — or about an hour before we were to start our Craft Beer School session. I was relieved to see familiar faces immediately — Father Spoon honked at me as he drove by in the parking garage, and Andrea was looking at the taps in the Backstage Bar when I walked in.

They were followed by others — Sickpuppy, Michelle, Norm, AAA, Dr. Yohe, Abby, AJ, Jenn, Christian and, just before showtime, Mrs. Crappy — enough friends that I was able to feel a little more comfortable than I did on the way downtown.

I was excited for the night, but I nervous about it as well. Talking in front of a room full of people generally isn’t a problem for me — if we’re talking about a couple dozen people. Two hundred and fifty is something else, and I could see every last one of them from the stage.

But Susan, one of the managers for the Cultural Trust and the other host of the series, really put me at ease as the room was filling up. And then BANG we got started, and I actually don’t recall a whole lot about what we did. I know I made a couple of decent jokes, and helped to answer a couple of questions — including one about beer at Penn, which might not be Tony’s favorite subject. I could have spoken up more than I did, but Tony said he was well prepared for this show, and it was a little hard to find a place to jump in.

And then we were done. We had a great crowd, good food, good beer — actually ranging from great (the Kulmbacher and the Small Craft Warning) to kinda just OK (the Schell’s) — and it seemed like everyone had a great time.

And then I had to drive back to work and type election results. Hanging out at the Backstage Bar for a little while would have been good, but I’m happy no one had a problem with me working a split shift on Tuesday.

Thanks to Tony, to everyone at the Trust and to everyone who came out to see me. It made the night much better.

A click on the pic will take you to a WPXI slideshow of the session. There are a lot of familiar faces in there…